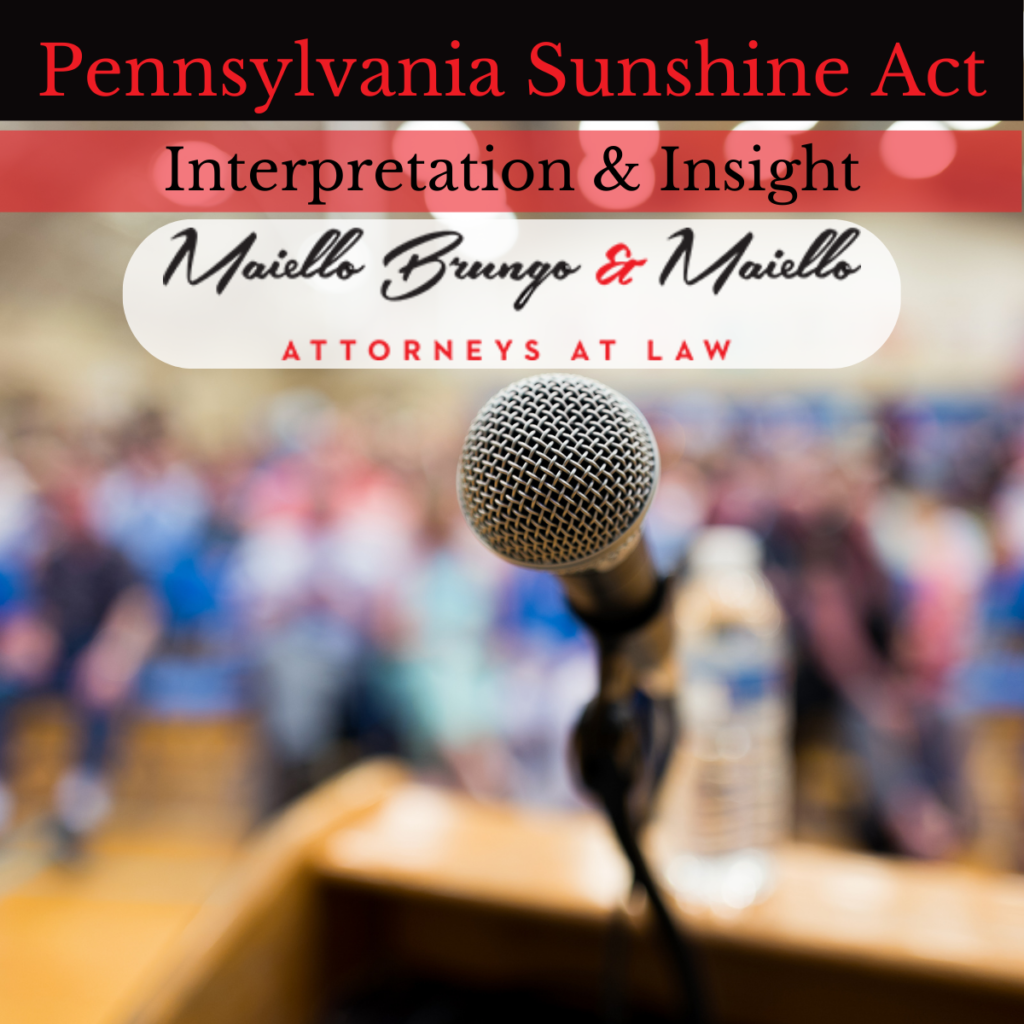 On June 30 of 2021, Pennsylvania Governor Tom Wolf signed into law Act 65, which amended Pennsylvania’s Sunshine Act (65 Pa. C.S. § 701 et seq.) to require “public agencies,” including municipalities and school districts, to publish a meeting agenda detailing the issues expected to be deliberated and voted on at the meeting, at least 24 hours prior to the public meeting. Senate Bill 554 also added a new section – 712.1 – to the Act, titled “Notification of Agency Business Required and Exceptions,” which allowed for some exceptions to the 24-hour rule.

The uncertainty of the statutory interpretation surrounding the 2021 amendment was addressed in a recent ruling from the Honorable J. Brian Johnson of the Lehigh County Court of Common Pleas. In that decision a motion for summary judgment was granted in favor of Parkland School District, the defendant, with regard to a decision to add an action item based on the approval of a majority vote of the Board at the meeting.

The case centered around the amended language of § 712.1 of the Pennsylvania Sunshine Act, which states: “[e]xcept as provided in subsections (b), (c), (d), or (e) an agency shall not take official action on a matter of agency business at a meeting if the matter was not included in the notification required under 709(C.1).” Section 709 (c.1) of the Act specifically states:

The plaintiff in the Parkland case alleged that the District violated the notice requirement of the Act when, at a meeting on October 26, 2021, the Board passed a motion to add to that evening’s Agenda a motion for the approval, authorization, and execution of a new collective bargaining agreement. In particular, the plaintiff argued that sections (b), (c), (d), and (e) were to be read, interpreted and applied together (ie., in pari materia) rather than separately.

In other words, Section 712.1(c), which permits official action on a matter of agency business that is not listed on the meeting agenda if “the matter is de minimis in nature and does not involve the expenditure of funds or entering into a contract or agreement by the agency”, was to be read in conjunction with section 712.1(e), which provides that “[u]pon majority vote of the individuals present and voting during the conduct of a meeting, an agency may add a matter of agency business to the agenda.”

According to the plaintiff, combined interpretation of these four sections would limit subsection (e) as to only those matters that were de minimis in nature and did not involve the expenditure of funds or entering into contracts or agreements.

Trust MBM Attorneys to Counsel You on Education Law in PA

The Court determined the statutory language as written, is unambiguously straightforward as the use of the word ‘or’ rather than ‘and’ between subsections (d) and (e) indicates subsections (b), (c), (d), and (e) of § 712.1 can be used alternatively to one another. The Plaintiff’s argument that subsection (e)(1) must be construed together with the other subsections of §712.1 was determined by the Court to be meritless as a plain reading of §712.1(a) indicates only one reasonable interpretation of the statute.

The court clarified that the use of the word “or” between subsections leads to the conclusion that agenda items can be added without twenty-four (24) hours’ notice by any of the means outlined in the exceptions in §712.1, including by a majority vote of individuals present and voting. The Judge found that this was a clear and plain reading of the statute, and thus rejected the plaintiff’s contention that the subsections were to be read in conjunction with one another.

This position is the one that the experienced team at Maiello, Brungo & Maiello have been correctly advising our school clients and municipal clients to adopt. While the law can be confusing and questions of how different sections of statutes interact with each other inevitably arise, an experienced and attentive solicitor will be able to guide clients through the likely outcomes of these situations and advise them in a manner that assures the best possible outcome.